Why Work in Alaska’s Fishing Industry? 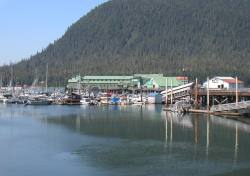 The reasons people travel to Alaska are seemingly endless. The final frontier has been an alluring part of the Northwest for ages, with never-ending tales of travel adventure from Alaskans and visitors alike.

Movies, literature and sports have all tried to tackle the element of Alaska that continues to keep people coming back for more.

Just recently John Krakauer’s book Into The Wild, a book documenting one boys trip and fight against the Alaskan wilderness, was turned into a major film.

Examples like these are an excellent indication of our ever-curious love affair with Alaska – its perils and its beauty.

And so it can be said that people travel to Alaska for many reasons: adventure, love, scenery, vacation, hunting, travel and sport. Similarly, people come to Alaska to work. Working in Alaska means so many things besides the day in and day out of a workday. It means working in the great expanse that is Alaska, it means seeing apart of the country that has been somewhat of wildlife landmark of the western hemisphere, it means expanding your horizons and it means meeting people who are like minded and in search of your same adventure. It also means good pay.

The great rewards nature gives us in its beauty and mystique, it similarly gives those who work hard during the fishing season. For anyone looking for work in the Alaska fishing industry they are probably coming for the promise of a good paycheck. And it has been true for years that the Alaskan fishing industry doesn’t disappoint when it comes to paying out. While the hours are long, sometimes tedious and sometimes physically demanding people come to Alaska because the fishing industry is a place to earn good money, quickly.

While the hourly pay of a fish processing job (the jobs that make up the majority of the work force and those in most demand) isn’t incredibly high, the number of workable hours is. People work Alaska because it is seasonal. A person might not be able to work split shifts, seven days a week for a year but they can do so easily for a few months. And so, a lot of workable hours and pay that increases substantially due to overtime, means that in a few short months, a worker in even the lowest paying job can expect some extremely good paychecks come seasons end. Perks like overtime as well as those who stay a full season are rewarded in their paychecks. And since most people come to Alaska fishing industry for the cash, this is music to their ears. Remember, that a job well done is well paid in Alaska.

Besides overtime, the earning potential increases as you stay through the duration of your fishing industry contract. Staying the full season usually means season-end bonuses and rewards for the hard work that you put in. It also means a chance for moving up into a better job during the season because people in front of you inevitably leave, or job demands change. Excellent earning potentials are also promising because there is very little time and very few ways, in which to spend your accumulating earnings. Large fisheries and businesses will often pay either all, or a portion of your lodging. They may offer you a place to stay or provide discounts on lodging in local areas. Many fishermen camp at inexpensive campgrounds or again, stay in their company’s provided accommodations. This means you aren’t spending your well-earned money on rent. On top of this, food is often provided by your employer or at the very least a portion of meals. So you aren’t running off spending your money on food either.

Lastly, because you are so busy and are most likely working the Alaska fishing industry because of the good pay that it offers, you won’t have many opportunities to spend your money on frivolous expenses like going to the bars or movies. Travel to many remote locations is often part of your contract and if you stay a full season your employer may reimburse your total travel expenses or have paid for it previous to the season beginning. It can be said most certainly, that the most expensive part of working in Alaska is the travel to and from Alaska. Other perks to staying the full season are increased hourly wages upon return. If one summer you worked as a processor and had plans on returning, you would almost certainly find higher wages the following fishing season. Return employees are treated and paid well, for their loyalty to the industry and for lessoning the burden of training to the employer. Return employees are often given jobs with greater responsibility as well, meaning higher pay and a job you prefer working.

While the work may be hard and long, you are certainly among a community of people who are there to achieve the same goals as you for your summer. Many workers are college students home for the summer. Many of these students work a portion of the summer earning thousands that they can ultimately use toward tuition, or other expenses during the year. They are almost all, young and exciting as well as from all areas of the world. Life long friendships aren’t only forged over a vacation or sporting adventure in Alaska, but in the fishing industry as well. Exploration as always been a part of anyone’s reason to visit or stay in Alaska and working a season in the fishing industry is no different.