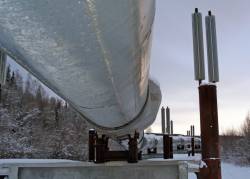 Alaska is one of the leading states for oil production in the United States. As a result, it shouldn’t be surprising that there are a large number of jobs required to fill such a big industry.

These jobs are drastically different than the hospitality related jobs that cruise ships and lodges require from workers and thus, they range extensively. However, their presence in Alaska means that the allure of Alaskan opportunity is the same as in these other industries and also, a good paycheck is sure to follow.

The oil industry as it relates to Alaska has a lot of events taking place. Most of the oil comes from the Alaskan north via the Trans-Alaska Pipeline System or TAPS. This pipeline was developed in the late 70’s under the employment of 70,000 people. The Alyeska Pipeline Service Company has been overseeing its operation as well as its repairs. Alyeska still employs thousands of employees who are working on repairs and is an excellent place to seek employment in the Alaskan oil industry.

In the near future there will be tremendous employment opportunities related to the Alaska Natural Gas Pipeline project, a new project that would begin transportation of natural gas from Prudhoe Bay, Alaska into Canada and ultimately into the Midwestern United States where it would be connected with gas industry truck lines. The Alaska state legislature awarded a contract to TransCanada in August 2008 and work on the natural gas pipeline is beginning. Construction of the pipeline will require thousands and thousands of people to fill jobs in hundreds of different areas. Another company, Denali, is also in the mix to build a similar pipeline. If the gas line truly goes forward it will be one of the largest construction projects ever completed and the jobs available for Americans and Canadians that will result have been estimated to be close to 9,000.

The oil industry in Alaska requires new people continually for drilling and exploration projects. For example, most of the oil industry in Alaska takes place at Prudhoe Bay, Alaska the site for the potential new pipeline. North Slope in Prudhoe Bay is a location where thousands of people earn a living from directly and indirectly working with Alaskan oil industries.  Over the last decade and a half, oil workers have extracted over fifteen million barrels of oil in the area and are also working consistently to extract more barrels. Exploring new methods for extraction and the locations of more oil is also a top focus. New recovery innovations and explorations mean that more jobs are available as a result. These jobs can include engineers, geologists, administrators, laborers, tool pushers and scientists.

This is just the tip of the iceberg as the oil industry in Alaska has consistently represented an excellent forum to gain employment. Just keep in mind that as the price of oil goes up, and with an industry that shows no signs of slowing down, now is an excellent time to get involved.

The Arctic National Wildlife Refuge represents a political sore spot that revolves around oil and has been a major point of discussion for years. The Arctic National Wildlife Refuge or ANWR exists in Prudhoe Bay, or Alaska’s North Slope and is the largest oil field in the United States. Exploration studies have suggested that the portion of the land protected by the wildlife refuge would yield large numbers of oil production if drilling were allowed. Alaskan residents, republicans and conservatives since the energy crisis in 1979 who support drilling, want to expand into the area. Environmentalists and ecologists, however, have adamantly protested due to the stress on local wildlife and resources the drilling would cause. The issue has been a hot topic for years and is a debate that continues.

Regardless of the decision, any increased drilling in Alaska means an increase in jobs and Alaska remains a bull’s-eye on the radar in terms of the oil industry and for employment opportunity.