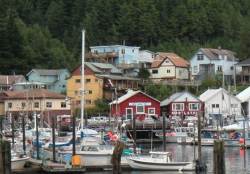 The areas of Alaska as we describe them are divided up into 5 areas. We describe these areas in greater detail in a section that follows but will go over them briefly because it will give you a better understanding of the fishery calendar in this section.

The areas of Alaska are divided up 1 through 5. If you picture Alaska on a map, Area 1 resides in the Southeast, of which the region is named after. It is the portion of Alaska that is furthest to the south and nearest Canada. From there the areas sprawl counter clockwise moving through the northwest. Thus Area 2 of Prince William Sound is closest to Area 1, followed by Area 3 (Kodiak Island), Area 4 is further north and further west in the Aleutian Islands and finally Area 5, the furthest north of the Alaska’s areas, in Bristol Bay.

Here is a Calendar outlining the Fishing Seasons in Alaska with the regions in which they run indicated as well.

No fisheries begin in the month of February but several are ongoing from other seasons.

No fisheries begin in July but there are several ongoing throughout the summer. It’s a peak month!

There are very few fisheries that begin in August, but several ongoing. Here are the few that begin during August.