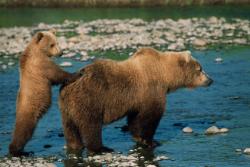 If Alaska is known for one thing, it would be for its expanse of wilderness. So it goes without saying that it’s pretty much gigantic. In fact, Alaska is the largest of the United States, with 600,000 square miles of area. For you Trivial Pursuit players, that is nearly 400,00 square miles larger than the U.S.’s second largest state, Texas. In light of this statistic, the cities in Alaska are anything but close together. While some might be closer than others, the state is known for its sparse populations and isolated patches of wilderness in between. Thus, not only is travel to the state long and possibly expensive but the same is true for travel within Alaska as well.  Therefore it is strongly unadvised to make travel plans without knowing which particular fishing town you will be working in. Since most of the towns are known for the fisheries that run out of them, it is common for a city in Alaska to mainly deal in one or two fisheries. Thus, if you choose to come to Alaska, don’t know the fishery or the season where you will be working, you run the risk of spending far too much on travel from one city to the next.

Simply put, it is wise to have an understanding of the areas in Alaska and which fisheries run out of these perspective locations.