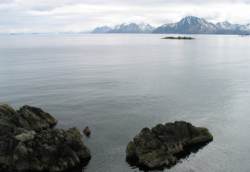 Area 4 includes a very famous part of Alaska, the Alaskan Peninsula and the Aleutian Islands. It stretches 600 miles from the Alaskan shore out to sea in a myriad of islands that are sparsely populated and difficult to arrive at. Additionally, after False Pass the islands continue to sprawl towards Asia for another 1,000 miles making the region rather extensive. The majority of fishing towns, however, are located within 600 miles of shore. The terrain of the area is what you might expect: cloudy, foggy, cold, windy and not particularly picturesque.

It isn’t wise as a first timer to have your sights set on Area 4 fishing. The islands are incredibly treacherous and difficult to get to. Travel into the region is also very expensive and unless you have prearranged travel plans, it isn’t advised to undergo the journey. Most captains and fishing processors running out of Area 4 hire well-established fisherman and industry workers. On top of that, much of the hiring is done out of Seattle with hired workers arriving into Alaska via travel plans made by, and provided by their employers.

Deckhands, as well, are highly sought after positions in the region and it is typically wise to generate experience and connections for yourself in a region other than Area 4 during your job hunt or first time out.

Some of Area 4’s larger towns include: Dutch Harbor, King Cove and Unalaska.