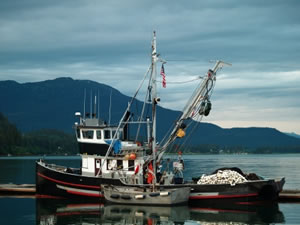 Purse Seining is the most productive method of catching salmon. Large nets are lowered from the boat all the way to the ocean floor, creating a curtain that can catch as many as 20,000 fish in a set. A good set, such as the one described, can be completed in as little as 45-minutes with ideal conditions during peak seasons. The size of the crew on a purse seiner is larger than on other boats and as a result, greenhorns can find work onboard more easily than on other ships. Since the purse seiners run to and from shore frequently, first-timers are awarded a quarter or half of the crew share for a short run (2-4 days). After which, they are voted on by the rest of the crew who decides whether or not they will be staying on.

While the work is long, hard and messy (as well as the fact that crewmembers often deal with stinging jellyfish among other nasty things) the pay is rather amazing. For two-months of work pay can equal $5,000, $10,000 and even $20,000 in some cases. On the other hand however, during poor seasons some deckhands barely earn enough to pay for food and their portion of fuel for the boat.

Purse Seiners catch 85% of the pink salmon, 15% of the sockeye and 2% of king salmon in the industry.

The crew is usually about five people as well as a skipper.

The boats are easily identifiable because of their size and the equipment onboard.

Jobs on a Purse Seiner can range from skiff jobs, netting and cooking, stacking cork lines and taking care of the lead line. This, as well as cleaning and maintenance, are also very common.