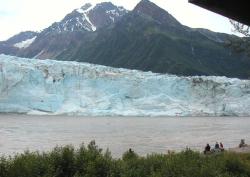 Traveling into Alaska is more often than not, a long journey. A journey that many people consider worthwhile even if just for the scenic tour along the way. Thousands of fishermen make their way up north each summer to work a fishing season in Alaska’s waters. The trip is a time to sit back and watch the changing landscape; one revered by many to be the most beautiful in the world.

Before considering just how you are going to get to Alaska consider where you might go before going to Alaska. For example, many companies that own fisheries or boats in Alaska do their hiring out of port cities like Seattle. Here, the companies conduct interviews and explain extensively the realities of working a fishing season in Alaska. Most people can have a job lined up for themselves by procuring work in these port towns before they even leave the bottom 48. The perks in searching for a job this way are many.

First, the security of knowing you will have a job when you get to Alaska. If you are a first-timer and are heading to Alaska without the security of a job when you get there, you are making several gambles. Travel into Alaska doesn’t have to be, but is generally expensive because of the sheer mileage it takes to arrive there. Thus, if you’re flying or driving, your travel expense represent a considerable monetary loss you’ve undergone before even arriving in Alaska. All of this without the security of a job or money to reimburse your travel expenses and the time loss you underwent for your journey.

Being hired out of a port town, like Seattle for instance, secures your place in a job making any of your travel expenses up to Alaska that much less of a gamble. Often times these companies will pay for travel expenses; either all of them, a portion of them, or reimburse you upon the seasons end. These terms are always in your contract and it is always wise to review them before agreeing on a job.

If you’re one of the many who head up to Alaska without procuring a job ahead of time, don’t feel bad – you’re not alone. There are thousands of people who head up north in search of fishing jobs a few weeks before the start of the season. Many of these people, by employing the right tactics are successful in their search. In doing so however, you almost always have to find your own way to the fishing waters of Alaska.

Planes, trains and automobiles is the name of a popular movie in the 80s but it is also the names of ways in which people make their way into Alaska.

Traveling by air into Alaska is certainly one way to get into the north and is of course by far the quickest. Airfare unfortunately is also the most expensive way to travel north into Alaska and gets considerably more expensive as you fly into the more remote Alaskan cities. There are a large number of flights from most major cities and while airfare fluctuates from city to city, prices are generally the same.

If you plan on working in any of the more remote regions we recommend purchasing your flight into Anchorage and then arriving to your other destinations by bus, car or ferry. Flying to the more remote cities is expensive and might not be a flight reimbursed by your employer later.

If you can make it to Seattle, consider hitching a ride on a fishing boat that is making its way up to Alaska anyway. It is an excellent segue into the experiences you will be having onboard and is a great way to take in the famous scenery along the way.

Hitching a ride on a ferry is another way to travel into Alaska and to do so cheaply. Most ferries will arrive in Alaska from Seattle in about two days allowing you the same luxuries as hitching a ride on a fishing boat. Ferries represent the most popular method in which college students and summer workers make their way up into Alaska each year. It is an enjoyable journey and is the cheapest option for travel.

Driving to Alaska is a great choice if you have the time and the money to spend on gas getting there. The scenery is legendary and well worth the mileage and time. For summer, it is considerably safer to drive than in the winter months when roads become icy and snowy up north. It used to be considered a great challenge to drive your way from the lower 48 into Alaska, but has since become a much easier journey. Always be sure your car or truck is in good shape and never take chances when it comes to filling up your gas tank. One of the worst situations you can put yourself into is being stranded in the Alaskan wild on an empty tank. While the road is much more well traveled than it used to be, it can be hours at a time before someone comes by to offer assistance.

Contacting the company you will be working for, or trying to find fellow travelers making the same journey up north, can eliminate some travel expenses by sharing the burden of gas expenses. Ride Boards on college campus’, the docks in Seattle and other community spaces is a great place to post or go in search of someone making a similar journey.