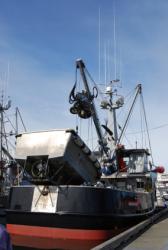 Jobs in Alaska’s fishing industry that take place offshore are the glam of Alaska fishing. Although the word ‘glam’ should be taken with a grain of salt in context to fishing in Alaska, it is these offshore jobs that tend to pay the most money, garner the most attention and involve more specialized skills. Aside from all of that, these jobs take place on boats and thus, are more conducive with what people think about when they think of the Alaskan fishing industry. All of this translates into a portion of Alaskan fishing that is more popular than onshore work.

Offshore jobs vary extensively from ship to ship and depending on the species of fish. Some large factory trawlers will have crews numbering in the hundreds with an equal number of job titles and varying responsibilities. Two or three people however, such as a gillnetting boat, may only operate small boats. As you might guess, there are any number of boats in varying sizes and with a varying number of employees that exist in between. Therefore it goes without saying that the type of work you might be doing greatly depends on the type of ship you work on. Because the type of ship is largely determined by the type of fishery it works under, the jobs in this section have been split up by fishery. This is the best way to learn and understand the types of jobs available and in what manner you should best search for them.

Perhaps the most groundbreaking in terms of the Alaskan fishing industry are the larger boats. Factory trawlers and longliners are the newest and fastest growing segment of Alaska fishing. These larger boats specialize mostly in groundfish (cod and sablefish for example) and employ hundreds of people with hundreds of different job titles. Deckhand positions, processors, cooks, medical care workers, engineers, fisherman and mechanics are all positions that can be found on these larger boats. Some of the less glamorous positions such as being an onboard processor represent a great opportunity for those new to the industry and eager to get a fishing job.

The smaller boats lend themselves to salmon fishing and can be run by as little as two people, although there are often more workers onboard. Salmon boats such as gillnetters or purse seiners usually fish close to land, near river mouths and ocean shorelines. In general, these areas represent the largest concentration of salmon populations and are the best areas in which to catch them. Because of the number of positions available on these smaller boats, which is considerably fewer than on factory trawlers, these positions are harder to obtain and are best suited for a person who has experience in the industry. Many people who find their way onto salmon boats worked as an onshore processor or as a processor onboard some of the afore mentioned, larger boats.

Offshore work can also consist of work on floating processors and tenders. These boats process fish offshore or deliver fish to land and other processing boats. Pot boats catch crab as well as bottom fish and longliners catch halibut and other groundfish. These boats represent the many medium sized boats with an average of twenty workers onboard. Additionally the fishing industry in Alaska has a large number of small trawler boats that catch groundfish but don’t process them. As you can see there are a variety of different boats and different ways in which these boats interact within the Alaskan fishing industry. In the following section we outline the different fisheries as they pertain to offshore jobs and describe harvesting, as it exists within these different fisheries. These further explanations will hopefully give you a better idea of where certain fisheries require offshore work.

Working on a Salmon Fishing Boat | =>