Groundfish, which include Sablefish, Alaska Pollock, Pacific cod, Lingcod and Flatfish are all harvested out of Alaskan waters. They are done so through the use of Longliners, trawl gear and pots. 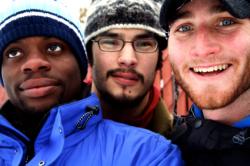 Longliners use a method to catch sablefish and other groundfish species that closely resemble the way halibut are harvested. The primary difference, and it makes sense, is that for groundfish, longliners set their lines much deeper into the water and use smaller hooks in order to acquire the fish that reside on the ocean floor. Longliners can be thought of in two different categories. There are factory longliners, who both catch and process fish, with much larger crews and there are the small longliners, with far fewer crewmembers who do not process fish onboard. Longliners catch fish by releasing lines that reside on the ocean floor. These lines are baited with hooks and sit for several hours until the crew brings them in. If you work for a groundfish fishery, you will only be licensed to catch for specific fish and thus, anything that doesn’t fit within your licensing will be thrown back or shaken off of the line.

The most common position in working on a longliner is as a processor or deckhand. This type of work shouldn’t be taken lightly because the work can be hard, tedious and oftentimes dangerous. The work of a deckhand involves more responsibility and also pays higher than that of a groundfish processor. Deckhands can be in charge of several different aspects of onboard work. Of these include: coiling the lines, helping the fish in with the gaff, knocking off unwanted species as well as other general deckhand responsibilities. These jobs may not be as difficult to procure as some others because of how many large longliners there are in the groundfish industry. Thus, anyone hired on as a processor but who shows interest in working on deck can reasonably expect to move up quickly. Crew sizes on longliners are also quite larger than those on some other ships and more people are needed to run the gear. Thus, it is a good place to go in search of work, either as a harvester or onboard processor.

Most of the cod harvest that longliners are known for take place in three seasons. From January 1 – April 30, 90% of the harvest takes place for longliners. May 1 – August 31 represents the second round where 10% of the harvest takes place. The last season beginning in September and running into October represents the last run out for longliners where they catch a variety of fish in an attempt to round out season earnings. Check out the Alaska fishing calendar for more details.

Some longliners will use pots in addition to the lines they use for catching groundfish. Pots are especially effective for catching shellfish and other bottom-dwelling crustaceans. Pots are essentially traps that lure fish in, but don’t allow them back out. Some longliners will simultaneously throw pots down to capture groundfish while their lines are out. This is mainly because it is time efficient and often successful.

Trawling boats represent the third type of boat used to capture groundfish. Groundfish are a common fish to be processed offshore. This means that either the same boats that harvest the fish are also processing them or, the boats that harvest groundfish are taking the fish to offshore processing boats. Factory trawlers are one such ship, known for being particularly large. Trawlers are boats that can be as long as 350 foot with both harvesting equipment as well as processing equipment onboard. In fact, many trawlers that catch and process groundfish were once oil boats and have been converted to fishing boats with large processing centers below the trawl. Trawlers tend to use computers and other technological methods for finding and catching fish. If you were to see the point of the skipper’s or captain’s command you would see computer screens identifying where large schools of fish could be found and caught.

Trawlers drag large nets in the ocean, catching anything that happens to swim within their path. When the nets are brought up, up to 150 tons of fish can be unloaded into the processing center where fish are sorted, graded, processed and frozen – all while the next net is set out to catch more fish. The type of processing that takes place onboard a trawler has everything to do with the type of fish onboard. Before procuring a job onboard ask about the type of processing and responsibilities that will be required of you by that particular boat. Factory trawlers can catch so much fish that they often fish for 24 hours straight. They will harvest until their freezers are full and they must return to unload their frozen fish hauls. Then, they return out to sea and the process repeats. It might be two months however, before a ship needs to head to shore and when the boats are unloading the fish, it is some of the most strenuous work involved. Let’s just say it’s not a time where many workers receive time off.

Trawlers, fish many different species but is an industry that is highly regulated. Be sure to carefully research during which seasons certain groundfish are being harvested. Trawlers commonly fish Pollock in two seasons known as A and B seasons. A season runs from January and February and B season takes place in mid August. Knowing the seasons is key for procuring work that will payoff for you as an employee. If you wanted to work on a factory trawler harvesting Pollock, it wouldn’t make sense to go in search for work in March for example.