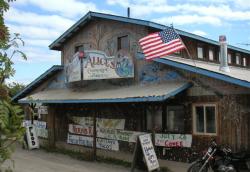 Work on the Kenai Peninsula

Area 2 can best be characterized by Prince William Sound and the Kenai Peninsula. In 1989 there was a large oil spill in the Sound which had a number of ill effects on the region. Since, the region has bounced back nicely and the ocean waters and local wildlife are back to normal numbers.

Area 2 or “The Sound,” is known for its exquisite beauty and the wildlife that inhabit the region. Kayaking its waters will give you ample opportunities to see not only the marine life in the area which includes: fish, whales, sea lions and seals but also bears, goats, moose and bald eagles. Lastly, the area is well known for the indigenous groups who occupy the land.

The Sound is known for its extensive rainfall each year, which in part plays into the lushness of this particular region. Purse seiners and gillnetters fish for sockeye salmon, a fish commonly harvested out of the area. Area 2 is home to the Copper River, a river that supplies ample salmon runs to the area each year. This river is perhaps the most significant and important part of the region for Alaska’s fishing industry and sockeye salmon are netted each year in mid-May, supplying Japan and the rest of the US with their great taste. Copper River salmon are priced 100% more than other Alaskan salmon and their high quality and taste are preserved in a special way of chilling that doesn’t involve freezing the shipments.

The cities that make up Alaska’s second region are: Anchorage, Seward, Kenai, Homer, Cordova and Valdez.